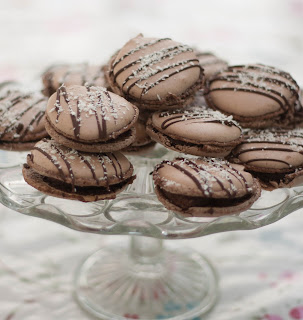 Earlier this month I stayed at WISE lured by the promise of a vegetarian breakfast and a weekend of laughs at the Machynlleth Comedy Festival. 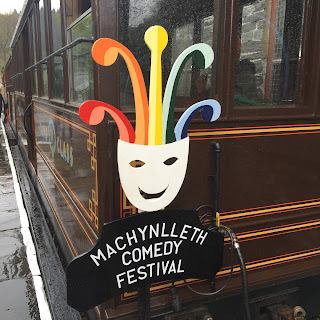 I liked WISE immediately, hard not to when you’re travelling on a water-balanced cliff railway to scenery that was beautiful even in the lashing rain. 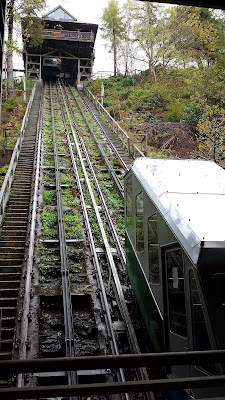 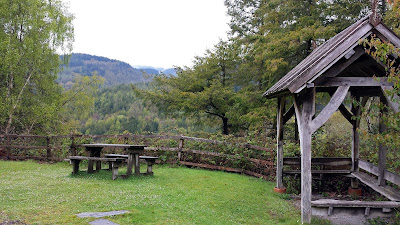 I was welcomed at WISE with a cup of tea and cakes when I did a double take at the pink macarons that looked normal but were labeled VEGAN. What was this egg-free witchcraft? The chef told me the secret ingredient is the water from tinned chickpeas – some dude in the US called Goose set the world of vegan baking aflutter recently after discovering that it whips up like egg white.

It was only when I got back to Newcastle and cracked open the chickpeas that I realised I hadn’t asked about the recipe. I cast about the internet and found a couple of US recipes for French-meringue uncooked sugar macarons here and here but neither worked for me. I suspect I didn’t beat the mix for long enough

For my third and final attempt (there’s only so much chickpea stew I can eat) I used my normal Italian-meringue cooked sugar macarons recipe, which worked much better. There were a few losses, as there usually are with macarons, and they are slightly more chewy than eggy macarons with bigger feet but they have a lovely gloss and taste delicious. In tribute to Machynlleth I’m calling them Macharons. Here’s the recipe:

If you don’t want chocolate macarons, leave out the cocoa powder and use 100g icing sugar instead of 90g. If you’d like to colour them, mix a little food dye into the paste

I added dessicated coconut and coconut extract to the ganache for extra flavour; the zest of an orange or some mint extract also works well

Drain the water from two tins of chickpeas. Don’t use chickpeas in brine unless you want them to taste salty, in which case seek help.

Simmer the chickpea water for 10 mins until it reduces to about half its volume, then allow to cool.
Mix the icing sugar, cocoa powder and ground almonds together with 40g chickpea reduction to form a thick paste.

Now make the Italian meringue mixture: weigh out another 40g chickpea reduction in a small clean metal or glass bowl and whisk it for a good 10 minutes until it is pale and fluffy and forms peaks. 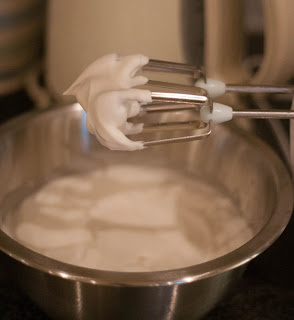 Heat the 37ml water and 100g caster sugar in a non stick pan to 114 degrees C as quickly as possible without stirring. It helps enormously to have a sugar thermometer for this, but if you don’t have one, you’ll know your syrup is ready when a drop of it can form a soft ball in a glass of cold water. 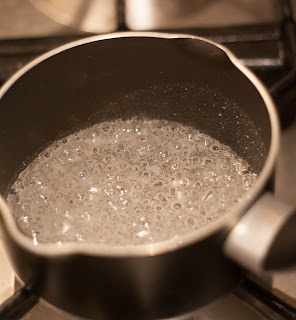 As the syrup reaches 114 degrees C, start whisking the fluffy chickpea reduction again and pour in the syrup down the side of the bowl. Continue beating for 5 minutes while the meringue mixture cools.

Using a spatula, fold one third of the meringue mixture into the chocolate almond paste, then add in the rest. You need to break down the meringue a little so that you have a mixture that is quite wet but not runny.

Line two baking trays with parchment. Put a plain round 1 cm nozzle in a piping bag and pipe out small round mounds onto the parchment. You can use a template to help you pipe them all the same size, or dip a round cookie cutter in icing sugar and draw an outline on the parchment with it. 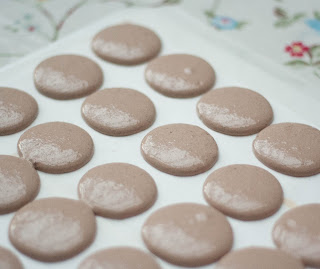 Tap the bottom of the trays lightly on the counter and leave the macarons to rest at room temperature for about half an hour. They will form a thin crust so that when you lightly run a finger over them, no mixture comes away. This helps to prevent the shells from cracking on the surface when they bake.

Heat the oven to 150 degrees C and bake the macarons for 14 minutes. As soon you take the cooked macarons out of the oven, slide the parchment on to a cold counter top to "shock" them and ensure they come cleanly off the parchment.

While they are cooling, make the ganache by heating the coconut milk and chocolate to near boiling point and mixing thoroughy. Add any flavourings now.

Once the macarons have cooled, you can fill them with the ganache. Remember not to overfill them so it doesn’t overpower the fragile shells. You can drizzle on melted dark chocolate and add decoration. 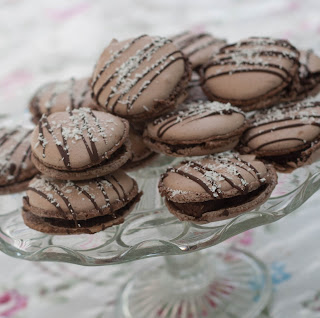 Kate Emmett
I love making cake, decorating cake, talking about cake and of course eating cake. I live in Jesmond, Newcastle upon Tyne and have my own cake making company Cake Poppins. If you like looking at pictures of cake, please visit www.cakepoppins.co.uk.